Silver Getting Accidental Boost From Base Metal Industry’s Gloom 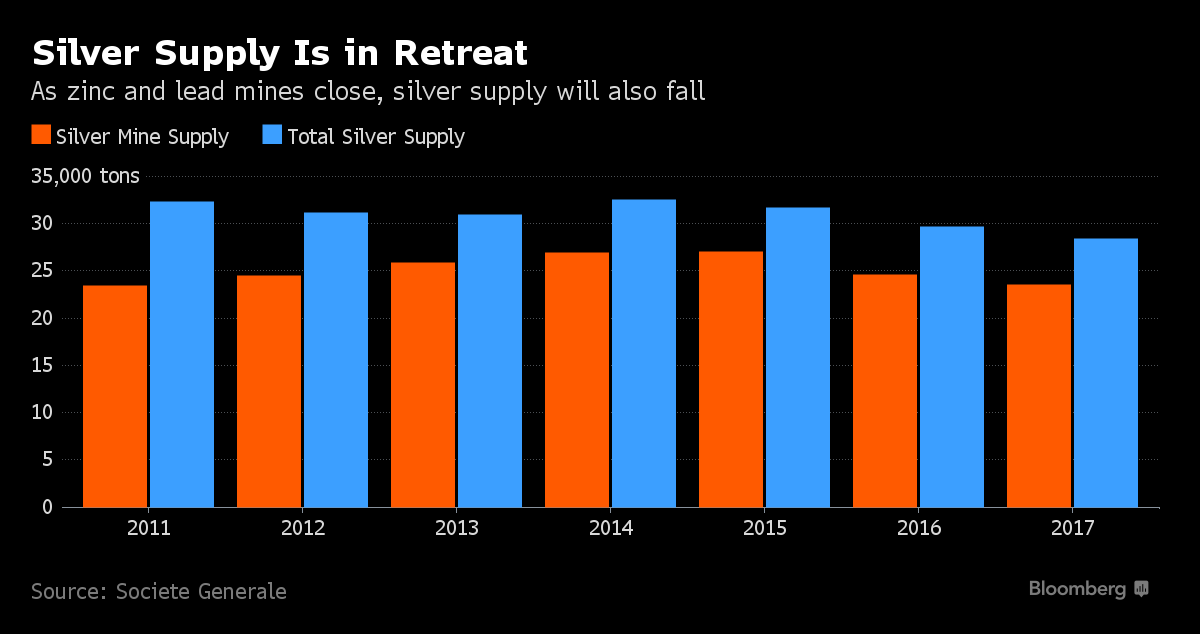 Silver is what happens to miners when they’re doing other things. About two-thirds of the world’s output is a byproduct scraped up when companies dig for base metals.

As producers react to weak Chinese demand by slashing output of copper, zinc and lead, a side effect is silver prices are getting a boost as less of the precious metal is unearthed. Production will fall this year for the first time in more than a decade, say Societe Generale SA and Standard Chartered Plc.

“We’ll continue to see mine cutbacks this year and that will play into the hands of silver,” said Ole Hansen, head of commodity strategy at Copenhagen-based Saxo Bank A/S . “This will give silver its long overdue attention.”

Prices have already gained 15 percent in 2016 to about $16 an ounce after three years of losses. Silver, known as the devil’s metal because of its often wild price swings, has been outpaced by gold’s 17 percent jump this year. Some of silver’s volatility comes from its dual aspect; part store of wealth popular during times of crisis, part industrial metal with demand linked to the economic cycle. It traded at almost $50 an ounce at its 2011 peak.

Supply may drop after a slump in industrial metals prompted mining cutbacks. Lead prices have fallen for the past three years, while zinc sank in 2015 by the most in seven years amid a rout in base metals that pushed the biggest mining companies into survival mode. Dividends have been scrapped, funds raised to pay off debt, mines closed and expansion plans slashed.

Glencore Plc, one of the first to cut supply, plans to lower copper output about 7.5 percent this year and reduce zinc production by a quarter. Mines including MMG Ltd.’s Century in Australia and Vedanta Resources Plc’s Lisheen in Ireland have been closed, while zinc and lead producer Nyrstar NV reduced output.

As a result of such actions, Societe Generale sees mined supply of silver down 9.2 percent this year. The bank estimates it will drop again next year to 23,600 metric tons, or 13 percent less than was mined in 2015.

“The secondary silver producers, mostly those driven by zinc, lead and copper, are seeing a big hit with lower prices,” said Ignacio Bustamante, chief executive officer of Hochschild Mining Plc, a producer of the precious metal in Peru and Argentina. “It’s something that generates significant upside potential for silver prices going forward.”