3D printing has long been a cool technology in search of a huge market. The industry may have found one in mass production.

Because of its high cost and slow pace, 3D printing’s use in manufacturing has been limited mostly to prototyping, making plastic molds for teeth alignment and creating tools. That may be about to change, potentially lifting the shares of printer makers 3D Systems Inc. and Stratasys Ltd. after a long slump.

HP Inc. will introduce a $130,000 printer later this year, which it says can make parts at half the expense and at least 10 times faster than rival printers — and likely use lower-cost materials. While HP’s entry could be a competitive blow, it may also help expand the market for 3D mass production, where other printer companies have already turned their focus.

Jabil Circuit Inc. plans to be an early adopter of HP’s device, printing end plastic parts for aerospace, auto and industrial applications that it currently makes using processes such as injection molding, John Dulchinos, vice president of digital manufacturing at the electronics-manufacturing service provider, said in an interview.

“We have use cases in each of these segments,” Dulchinos said. “Parts that are in hundreds or thousands or tens of thousands of units — it’s cheaper to 3D print them than mold them.”

HP’s technology may usher in a new era for the industry. Production applications for 3D printing could eventually grab at least 5 percent of the worldwide manufacturing economy, and translate into $640 billion in annual sales, according to Wohlers Associates, which has tracked the 3D printing market for 28 years.

“It’s one of our anchor businesses we’ll divert money on,” HP Chief Technology Officer Shane Wall said in an interview. “It’s a very high strategic value for us.”

3D Systems Chief Executive Officer Vyomesh Joshi, who joined the Rock Hill, South Carolina-based company in April after more than three decades at HP, said on a conference call Wednesday that his business is evolving from prototyping to “light production.” The shares rallied 18 percent after the company posted second-quarter earnings that beat analysts’ estimates and said its profit margin increased from a year earlier partly as it shifted away from consumer products.

A few years ago, the industry had banked on putting a 3D printer in every home — yet that market never materialized as consumers found the devices fragile, expensive and snail slow. That bet proved torturous to 3D Systems and Stratasys, both of whose shares plunged about 85 percent since the beginning of 2014. More recently, the stocks have been under pressure by a slowdown in sales for prototyping applications as customers delay purchases to evaluate new products from companies like HP, said Robert Burleson, an analyst at Canaccord Genuity. 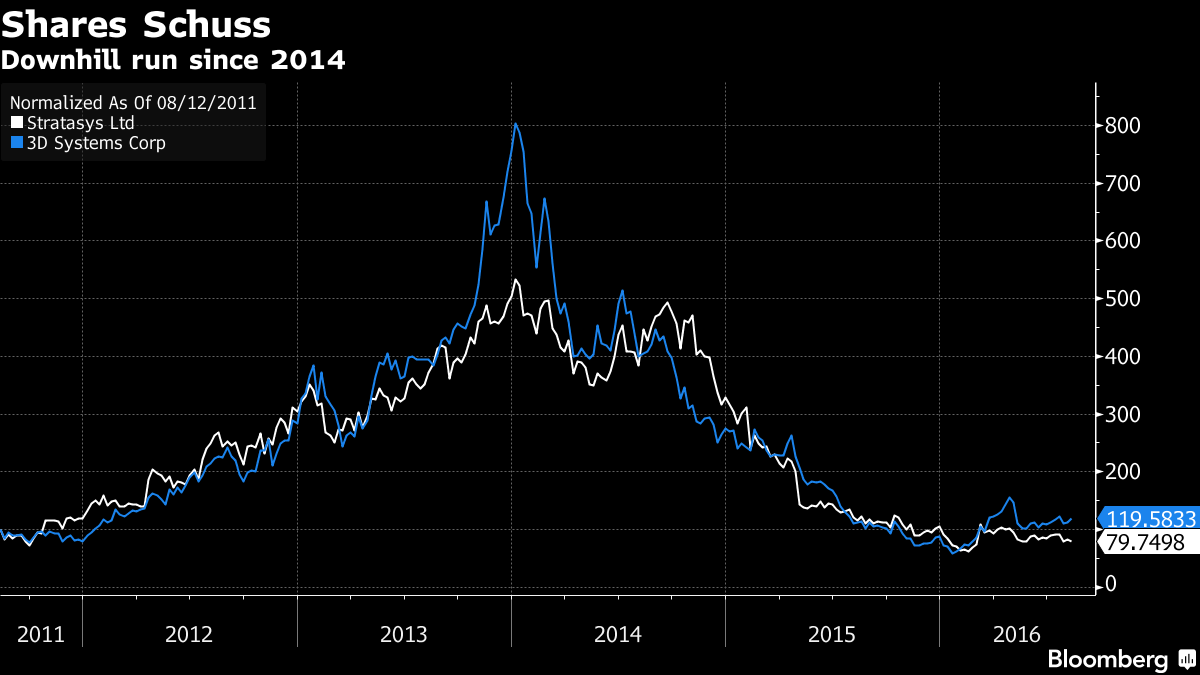 Eden Prairie, Minnesota-based Stratasys has refocused research and development on production for the past 18 months, Chief Business Officer Josh Claman said in an interview. He said changes to the industry are happening “even faster than we thought.”

“You are going to see a change in the nature of the market from when it was predominantly prototyping,” Claman said. The company’s high-growth areas “whether it’s in medical or aerospace of automobile –- are focused on production.”

Stratasys reported second-quarter revenue Thursday that missed analysts’ estimates, and reaffirmed its guidance for the year. The shares fell 1.5 percent to $20.09 at 11:25 a.m. in New York trading. Ilan Levin, who became CEO on July 1, said the business is being transformed “by the greater need for enhanced value for specific additive manufacturing applications.”

Even so, it’ll take time to show and persuade manufacturers that 3D printing is a more cost-effective way to produce than existing processes, Canaccord’s Burleson said in an interview.

“Growth of the mass production market isn’t something that can be pushed onto customers,” he said. They “have to see value proposition and there has to be continued materials innovation. It’s not going to be an orderly transition” nor a quick one, he said.

The printer makers will have to prove that their devices can produce parts with the same or better quality –- and perhaps, with new characteristics. HP’s printer, for example, can layer colors, so a user can see when a part is worn out.

3D System’s Joshi acknowledged that the move toward 3D mass production will take time. “Case by use case, customer by customer, I’ll hold their hand and help them move from prototyping to manufacturing,” he said in a telephone interview.

The industry may have to revamp the way materials are sold. One of Palo Alto, California-based HP’s most drastic moves has been to open up its 3D printing materials ecosystem to any supplier. Rivals may need to follow suit, Terry Wohlers, president of Wohlers Associates, said in an interview. Today, 3D printer companies sell their own materials, much the same as ink-jet printer makers, which draw much of their revenue from ink.

“Through competition, prices will be driven downward,” Wohlers said. “When a company and technology are potentially disruptive, you are going to see changes in the industry.”

HP said in May that BMW AG, Nike Inc. and Johnson & Johnson are among its development and strategic partners. The luxury German carmaker sees “major potential” for its “future roadmap toward serial part production and personal customization,” Jens Ertel, head of BMW’s Group Additive Manufacturing Center, said in a May 17 statement.

This entry was posted in 3D Printing, Metal Marketing, News. Bookmark the permalink.