Stephen McNeil’s home Fredericton Junction is the first to host a Tesla powerwall in the province.

The powerwall came from the company’s designs for electric vehicle power storage. It is a wall-mounted battery unit designed to hold electricity from alternative power sources, as well as the grid. It will power a structure during times of outages. 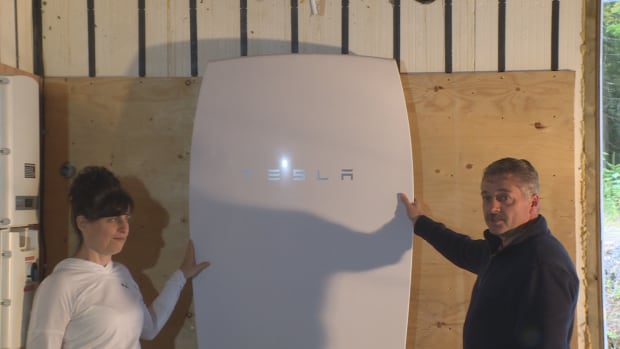 Stephen McNeil was contacted by NB Power earlier this year and asked if he would participate in the pilot program which brought the new technology into his home. (Shane Fowler/CBC)

“I was looking at one of my bills one day,” said McNeil. “I noticed a discrepancy in it so I contacted NB Power and they fixed it right away and and that evening I received an email from NB Power asking if I wanted to be part of a pilot program for the new Tesla Powerwall.”

McNeil is the first and only New Brunswicker so far to receive a powerwall unit. He charges it with solar energy from his 39 solar panels, as well as energy from the grid. Stored energy can power a home for several hours.

“It all depends on the load I put on it,” said McNeil. “Right now I have a fridge, the freezer. I have a living room circuit which has the TV and the modem. They say that depending on the load and what comes on at any given time, anywhere between 12 and 24 hours.”

The large, sleek, wall-mounted batteries are designed primarily to capture energy collected by solar rays in order to power homes and businesses during nighttime or when the sunlight is obscured. It can also be used to collect energy from the grid during time periods when electricity is not in high demand and use it during peak hours, when electricity is in high demand. Homeowners would see savings on their bills in areas where prime time pricing at higher rates is in effect for electricity consumed during peak hours.

“They did a mock power outage and within two seconds the backup battery kicked in and was feeding into the circuits I selected,” said McNeil. 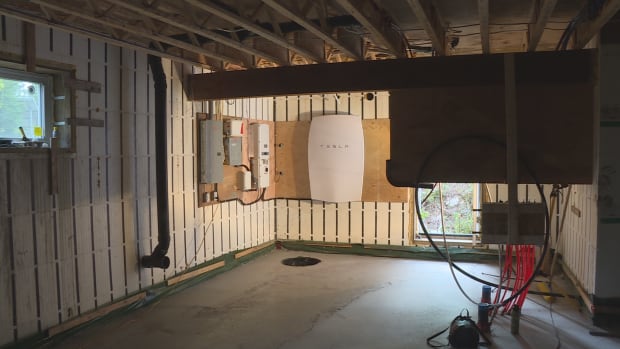 McNeil says based on his usage the powerwall can provide stored energy for his home for up to 24 hours in the case of an outage. (Shane Fowler/CBC)

“We are one of several utilities across Canada participating in national trial of 25 homes that will test the technology requirements to install a battery system, allowing the household to store power,” Marie-Andrée Bolduc, spokesperson for NB Power wrote in an email.

“From the utility’s perspective, this trial is one part of the development of an integrated smart grid system that will allow NB Power to test the battery capability, by charging it during off peak times to reduce the demand on the provincial grid.”

The pilot program will only see a single Tesla powerwall installed in New Brunswick.

“In New Brunswick, one customer, who is currently part of our net-metering program, has met the program criteria and has had this technology installed in their household for the duration of the trial,” wrote Bolduc.

The pilot program will run for a year said McNeil.

“After that, they said I get to keep it, said McNeil. “And while it’s rated to run ten years without losing any charge, but the Tesla guys say it will probably last for fifteen.”