Scientists have spent decades searching for a safe alternative to the flammable liquid electrolytes used in lithium-ion batteries.

Now Stanford University researchers have identified nearly two-dozen solid electrolytes that could someday replace the volatile liquids used in smartphones, laptops and other electronic devices. The results, based on techniques adapted from artificial intelligence (AI) and machine learning, are published in the journal Energy & Environmental Science. (See video here.)

“Electrolytes shuttle lithium ions back and forth between the battery’s positive and negative electrodes,” said study lead author Austin Sendek, a doctoral candidate in applied physics and first author on the paper. “Liquid electrolytes are cheap and conduct ions really well, but they can catch fire if the battery overheats or is short-circuited by puncturing.”

“The main advantage of solid electrolytes is stability,” Sendek said. “Solids are far less likely to blow up or vaporize than organic solvents. They’re also much more rigid and would make the battery structurally stronger.” 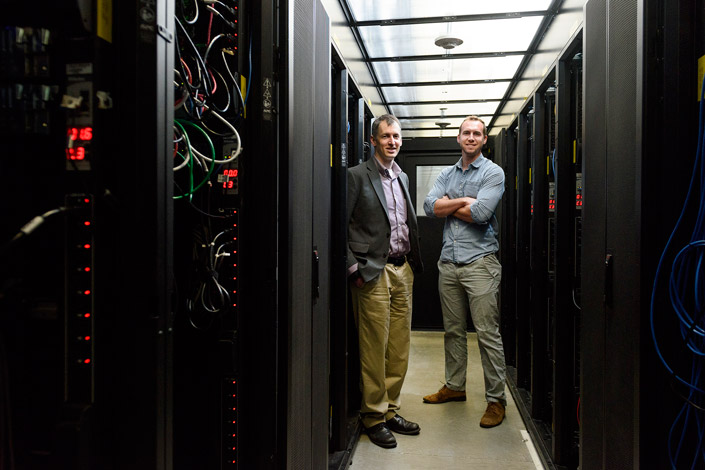 Despite years of laboratory trial and error, researchers have yet to find an inexpensive solid material that performs as well as liquid electrolytes at room temperature.

Instead of randomly testing individual compounds, the team turned to AI and machine learning to build predictive models from experimental data. They trained a computer algorithm to learn how to identify good and bad compounds based on existing data, much like a facial-recognition algorithm learns to identify faces after seeing several examples.

“The number of known lithium-containing compounds is in the tens of thousands, the vast majority of which are untested,” Sendek said. “Some of them may be excellent conductors. We developed a computational model that learns from the limited data we already have, and then allows us to screen potential candidates from a massive database of materials about a million times faster than current screening methods.”

“Austin collected all of humanity’s wisdom about these materials, and many of the measurements and experimental data going back decades,” said Evan Reed, an assistant professor of materials science and engineering and a senior author on the paper. “He used that knowledge to create a model that can predict whether a material will be a good electrolyte. This approach enables screening of the full spectrum of candidate materials to identify the most promising materials for further study.”

The model used several criteria to screen promising materials, including stability, cost, abundance and their ability to conduct lithium ions and re-route electrons through the battery’s circuit.

Candidates were selected from The Materials Project, a database that allows scientists to explore the physical and chemical properties of thousands of materials.

“We screened more than 12,000 lithium-containing compounds and ended up with 21 promising solid electrolytes,” Sendek said. “It only took a few minutes to do the screening. The vast majority of my time was actually spent gathering and curating all the data, and developing metrics to define the confidence of model predictions.”

The researchers eventually plan to test the 21 materials in the laboratory to determine which are best suited for real-world conditions.

“Our approach has the potential to address many kinds of materials problems and increase the effectiveness of research investments in these areas,” Reed said. “As the amount of data in the world increases and as computers improve, our ability to innovate is going to increase exponentially. Whether it’s batteries, fuel cells or anything else, it’s a really exciting time to be in this field.”

The work was funded by an Office of Technology Licensing Stanford Graduate Fellowship and a seed grant from the TomKat Center for Sustainable Energy at Stanford.