Three new plants in California show how lithium-ion storage is ready to power the grid.

Tesla Motors Inc. is making a huge bet that millions of small batteries can be strung together to help kick fossil fuels off the grid. The idea is a powerful one—one that’s been used to help justify the company’s $5 billion factory near Reno, Nev.—but batteries have so far only appeared in a handful of true, grid-scale pilot projects.

That changes this week.

Three massive battery storage plants—built by Tesla, AES Corp., and Altagas Ltd.—are all officially going live in southern California at about the same time. Any one of these projects would have been the largest battery storage facility ever built. Combined, they amount to 15 percent of the battery storage installed planet-wide last year.

Ribbons will be cut and executives will take their bows. But this is a revolution that’s just getting started, Tesla Chief Technology Officer J.B. Straubel said in an interview on Friday. “It’s sort of hard to comprehend sometimes the speed all this is going at,” he said. “Our storage is growing as fast as we can humanly scale it.” 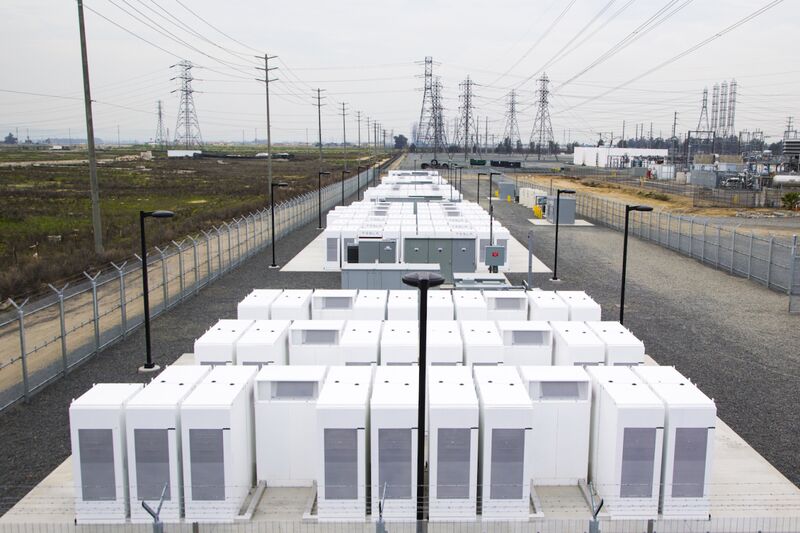 The new battery projects were commissioned in response to a fossil-fuel disaster—the natural gas leak at Aliso Canyon, near the Los Angeles neighborhood of Porter Ranch. It released thousands of tons of methane into the air before it was sealed last February.

In its wake, Southern California Edison (SCE) rushed to deploy energy storage deals to alleviate the risk of winter blackouts. There wasn’t any time to waste: All of the projects rolling out this week were completed within 6 months, an unprecedented feat. Tesla moved particularly nimbly, completing in just three months a project that in the past would have taken years. 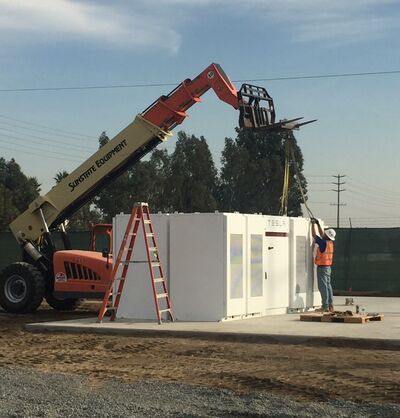 “There were teams working out there 24 hours a day, living in construction trailers and doing the commissioning work at two in the morning,” Straubel said. “It feels like the kind of pace that we need to change the world.”

A Question of Price

The battery storage industry—a key part of the plan if wind and solar power are to ever dominate the grid—is less than a decade old and still relatively small. Until recently, batteries were many times more expensive than natural gas “peaker” plants that fire up to meet surging demand in the evening and morning hours.

But prices for lithium-ion batteries have fallen fast—by almost half just since 2014. Electric cars are largely responsible, increasing demand and requiring a new scale of manufacturing for the same battery cells used in grid storage. California is mandating that its utilities begin testing batteries by adding more than 1.32 gigawatts by 2020. For context, consider this: In 2016, the global market for storage was less than a gigawatt.

California’s goal is considerable, but it’s dwarfed by Tesla’s ambition to single-handedly deliver 15 gigawatt hours 1 of battery storage a year by the 2020s—enough to provide several nuclear power plants–worth of electricity to the grid during peak hours of demand. Not everyone, however, is that optimistic.

“I’m not convinced,” said Yayoi Sekine, a Bloomberg New Energy Finance analyst who covers battery technology. The market is “moving faster than ever, but it’s not on the gigawatt scale yet.”

Battery costs and profitability for utilities are difficult to evaluate. Companies are reluctant to give up their pricing data, and the expense is highly variable. Nevertheless, battery plants take up a much smaller footprint than gas-powered plants, they don’t pollute, and their instant response can provide valuable services better than any other technology. In a small but increasing number of scenarios, batteries are already the most economical option.

But for the most part, according to a BNEF analysis, the costs of new projects would need to drop by half in order to be profitable on a wider scale in California, and that’s not likely to happen for another decade. The total installed cost of a battery plant would need to fall to about $275 per kilowatt hour. While Tesla declined to provide its pricing data, the similarly sized Altagas project was expected to cost at least $40 million, or $500 per kilowatt hour. It’s possible that with the remarkable scope of Tesla’s Reno operations, the company will be able to establish new floors for pricing, forcing the industry to follow, BNEF’s Sekine said. 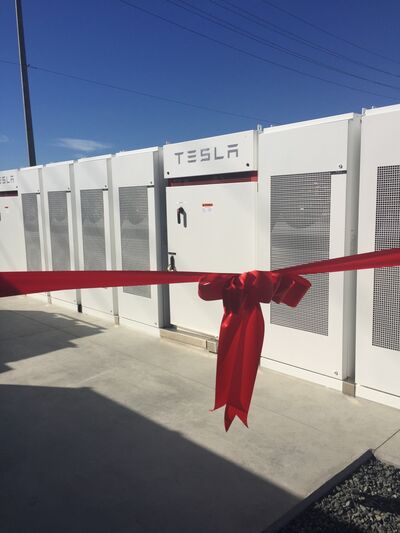 It’s still early days, even with this week’s announcements. It will probably be a few years before Tesla’s battery-storage sales are material enough to break out separately from automotive sales on quarterly filings, Straubel said.

The End of the Gas Peaker

But the battery’s day is coming, while those of natural gas peaker plants are numbered. That’s the prediction of John Zahurancik, AES’s president of battery storage. Zahurancik is one of the pioneers of energy storage, having cobbled together profitable edge-case storage projects since 2008, when battery prices were 10 times higher than they are today.

AES has completed installation and is doing final testing of a 30 megawatt/120 megawatt hour plant that’s even bigger than Tesla’s 20 MW/80 MWh. AES is also working on a longer-term project that will be five times the size of Tesla’s project when complete by 2021. 2 That’s a scale that would have been unimaginable a decade ago.

“This is my fifth time doing the largest project in the world for energy storage, and each time people tell me, ‘well this is the test, this is really the test’” Zahurancik said in an interview Friday. “The next big test is how do we scale this up broadly.”

The biggest thing that sets Tesla and AES apart is that Tesla is building the components of its storage units itself at the company’s Gigafactory in Reno, including battery cells with partner Panasonic, modules, and inverters. Tesla says this vertical integration will help reduce costs and make a seamless system. AES says that dealing with a diverse supply chain allows it to seek the cheapest price and the best technology on the market. It’s the same debate going on in the electric-car business, where Tesla is manufacturing an unprecedented percentage of its own parts in-house.
For now, gas peaker plants still win out on price for projects that aren’t constrained by space, emissions, or urgency, said Ron Nichols, President of SCE, the California utility responsible for most of the biggest battery storage contracts. 3 But that may change in the next five years, he said.

“Long term, will large amounts of batteries be able to take over?” Nichols asked. “We’ll need to get some hours under our belts to know for sure.”

—With assistance from Dana Hull.