Glencore Is on to a Winner With This Obscure Metal – Cobalt

Cobalt is having a moment in the spotlight. Historically a minor byproduct of copper and nickel mining, the metal is a key ingredient for lithium-ion batteries and now a growing money maker for Glencore Plc.

In the past eight months, prices more than doubled on speculation that supply won’t keep up with demand for batteries in electric cars. Glencore, the largest cobalt producer, plans to about double output by 2018, and only coal, copper and zinc offer more of an earnings boost when prices rise.

Cobalt, which has been in oversupply for years, was often treated as an afterthought at the copper and nickel mines where it’s found. Now, demand for the once obscure metal that’s mined largely in the Democratic Republic of Congo is soaring as it graduates from mobiles to larger batteries in electric vehicles and homes. 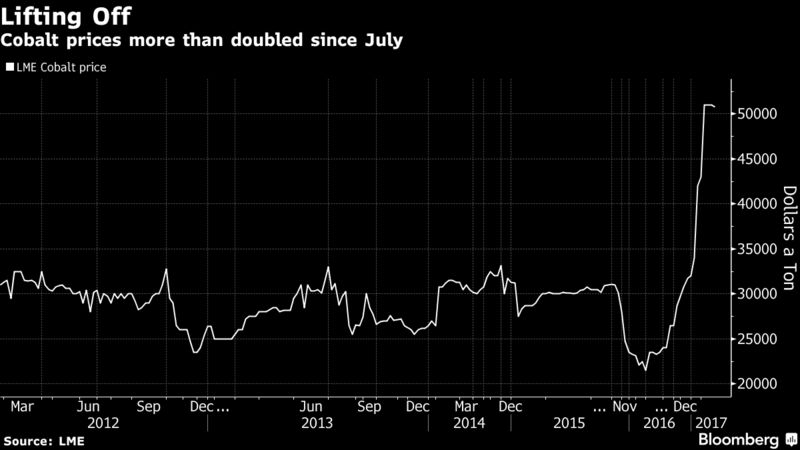 At Glencore, cobalt is “starting to make a significant difference to earnings,” and is helping reduce costs in its larger copper mining business, Tyler Broda, an analyst at RBC Capital Markets in London, said by phone. “Glencore’s copper business is now one of the best-placed in the world in terms of cost right now, and byproducts like cobalt have played a big part in that.”

Every 10 percent change in the cobalt price affects Glencore’s earnings before interest, taxes, depreciation and amortization by about $150 million, according to Barclays Plc analysts including Ian Rossouw. If prices rise another 50 percent and Glencore achieves its output targets by 2019, that would add about $2.2 billion to annual earnings, they said in a March 1 note.

The producer is also doubling down on its exposure to the metal, with a deal last month to buy full control of the world’s biggest cobalt mine. It will acquire 31 percent in Mutanda Mining in the DRC from billionaire Dan Gertler.

The cobalt market was in a deficit last year for the first time since 2009, according to Darton Commodities Ltd., a cobalt trading house based in Guildford, U.K. The group predicts deficits will widen as annual battery-powered vehicle sales rise from 750,000 currently to an estimated 13 million in 2020.

Some analysts have cautioned that the cobalt market is in danger of overheating. While deficits will “undoubtedly” support higher prices over the year, there’s a risk that slowing demand and profit-taking by hedge funds could push prices lower in the second quarter, according to Edward Spencer, a senior consultant at CRU.

That’s not deterring Bob Mitchell, a Tualatin, Oregon-based managing member at Portal Capital, who began buying physical metal for his Green Energy Metals Fund when prices were below $11 per pound ($24,250 per ton). Mitchell still views the market as cheap relative to historical averages and expects prices will be higher this time next year, he said.

Peter Grauer, the chairman of Bloomberg LP, is a senior independent non-executive director at Glencore.