Trump Finds Reason for the US to Remain in Afghanistan: Minerals 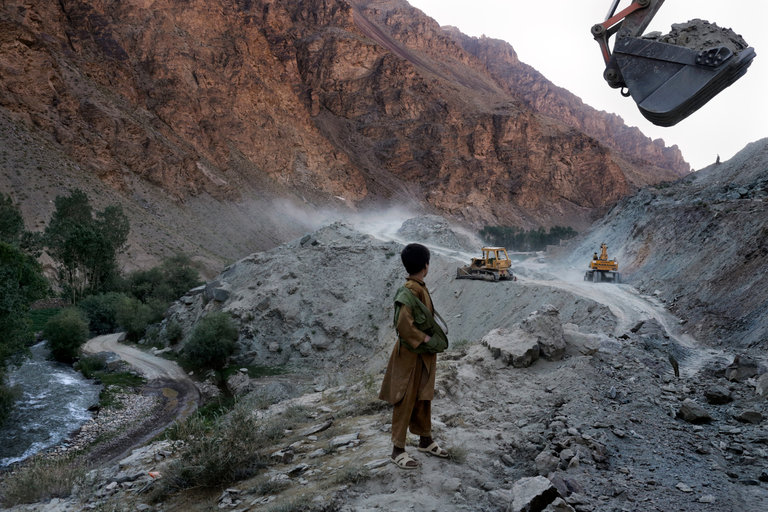 WASHINGTON — President Trump, searching for a reason to keep the United States in Afghanistan after 16 years of war, has latched on to a prospect that tantalized previous administrations: Afghanistan’s vast mineral wealth, which his advisers and Afghan officials have told him could be profitably extracted by Western companies.

Mr. Trump has discussed the country’s mineral deposits with President Ashraf Ghani, who promoted mining as an economic opportunity in one of their first conversations. Mr. Trump, who is deeply skeptical about sending more American troops to Afghanistan, has suggested that this could be one justification for the United States to stay engaged in the country.

To explore the possibilities, the White House is considering sending an envoy to Afghanistan to meet with mining officials. Last week, as the White House fell into an increasingly fractious debate over Afghanistan policy, three of Mr. Trump’s senior aides met with a chemical executive, Michael N. Silver, to discuss the potential for extracting rare-earth minerals. Mr. Silver’s firm, American Elements, specializes in these minerals, which are used in a range of high-tech products.

Stephen A. Feinberg, a billionaire financier who is informally advising Mr. Trump on Afghanistan, is also looking into ways to exploit the country’s minerals, according to a person who has briefed him. Mr. Feinberg owns a large military contracting firm, DynCorp International, which could play a role in guarding mines — a major concern, given that some of Afghanistan’s richest deposits are in areas controlled by the Taliban.

In 2010, American officials estimated that Afghanistan had untapped mineral deposits worth nearly $1 trillion, an estimate that was widely disputed at the time and has certainly fallen since, given the eroding price of commodities. But the $1 trillion figure is circulating again inside the White House, according to officials, who said it had caught the attention of Mr. Trump.

The lure of Afghanistan as a war-torn Klondike is well established: In 2006, the George W. Bush administration conducted aerial surveys of the country to map its mineral resources. Under President Barack Obama, the Pentagon set up a task force to try to build a mining industry in Afghanistan — a challenge that was stymied by rampant corruption, as well as security problems and the lack of roads, bridges or railroads.

None of these hurdles has been removed in the last eight years, according to former officials, and some have worsened. They warn that the Trump administration is fooling itself if it believes that extracting minerals is a panacea for Afghanistan’s myriad ills.

“It would be dangerous to use the potential for resource exploitation as a selling point for military engagement,” said Laurel Miller, a senior analyst at RAND who served until last month as the State Department’s special representative for Afghanistan and Pakistan. “The barriers to entry are really quite considerable, and that kind of argument could fuel suspicion about America’s real intentions in Afghanistan.”

But for Mr. Trump, as a businessman, it is arguably the only appealing thing about Afghanistan. Officials said he viewed mining as a “win-win” that could boost that country’s economy, generate jobs for Americans and give the United States a valuable new beachhead in the market for rare-earth minerals, which has been all but monopolized by China.

China already has a $3 billion contract to develop a copper mine about 25 miles southeast of the Afghan capital, Kabul. Officials said Mr. Trump was determined not to spend American lives and treasure in Afghanistan only to watch China lock up its rare-earth deposits, which are used to make products from wind turbines to computer chips.

Mr. Silver, the chemical executive, may head an effort to maximize the rights for American companies to extract these minerals, according to a senior official.

Mr. Trump’s interest also reflects how his military advisers have struggled to present him with other persuasive reasons to send troops to the country, where the United States has been at war since 2001.

The White House’s review of Afghanistan policy — led by Defense Secretary Jim Mattis and the national security adviser, Lt. Gen. H. R. McMaster — was supposed to be finished by the middle of July. Instead, it bogged down after Mr. Trump expressed displeasure with a proposal from General McMaster for a modest troop increase and a multiyear commitment to the country.

Policy meetings have become increasingly heated, officials said, as Mr. Trump and his chief strategist, Stephen K. Bannon, have squared off against General McMaster. Secretary of State Rex W. Tillerson is also said to be unhappy with the current proposals.

Vice President Mike Pence, not General McMaster, will lead a meeting Wednesday of National Security Council principals on Afghanistan. Some officials said that reflected General McMaster’s isolation; others said that the general welcomed Mr. Pence’s involvement and that the two were closely aligned on the policy.

But Mr. Trump, it is clear, is not. In June, he grudgingly agreed to give Mr. Mattis the authority to send additional troops — a number believed to be about 4,000 — as a stopgap measure to stabilize security in Afghanistan. But Mr. Mattis has not yet used his authority, perhaps reflecting his recognition that the commander in chief is uncomfortable with it.

When reporters last week asked Mr. Trump at a meeting at the Pentagon whether he planned to send more troops, he answered, “We’ll see,” and added, “ISIS is falling fast,” suggesting he viewed the counterterrorism threat in Afghanistan as declining.

Worried that Mr. Trump will be locked into policies that did not work for the last two presidents, Mr. Bannon and the president’s son-in-law, Jared Kushner, have brought in outside voices, including Mr. Feinberg and Erik D. Prince, a founder of the private security firm Blackwater International. Both have urged using more private contractors and giving the C.I.A. an oversight role in the conflict.

In addition, Mr. Feinberg has reached out to people involved in the Obama administration’s effort to build Afghanistan’s mining industry. Some warned him that the prospects for a profitable business are worse now than in 2009, given the decline in commodities prices and the deteriorating security in areas where the deposits are believed to lie.

Afghanistan’s deposits of copper and iron ore are trading at about a third of their 2010 prices. Most of the undiscovered deposits of rare-earth minerals are believed to be in Helmand Province, large parts of which are controlled by the Taliban.

“There are undoubtedly minerals to be exploited in Afghanistan, which could help provide economic stability to the country in the future,” said Daniel F. Feldman, a former special representative for Afghanistan and Pakistan. “But given all the obstacles, it could be many years before mining yields dividends for the Afghan people.”

One advantage is that the Trump administration would have a willing partner in the Afghan government. During the Obama administration, President Ghani resisted the rapid development of the mining industry, largely because he worried about the threat of widespread corruption that would come with it.

But as soon as Mr. Trump was elected, Mr. Ghani reversed his position, contacting the Trump team and promoting Afghanistan’s mineral wealth. He realized that Mr. Trump would be intrigued by the commercial possibilities, officials said.

Mr. Trump has said little publicly about Afghanistan since being elected. But his thinking about what the United States should reap for its military efforts was made clear in another context soon after his inauguration. Speaking to employees of the C.I.A., the president said the United States had erred in withdrawing troops from Iraq without holding on to its oil.

“The old expression ‘To the victor belong the spoils,’” Mr. Trump declared. “You remember?”