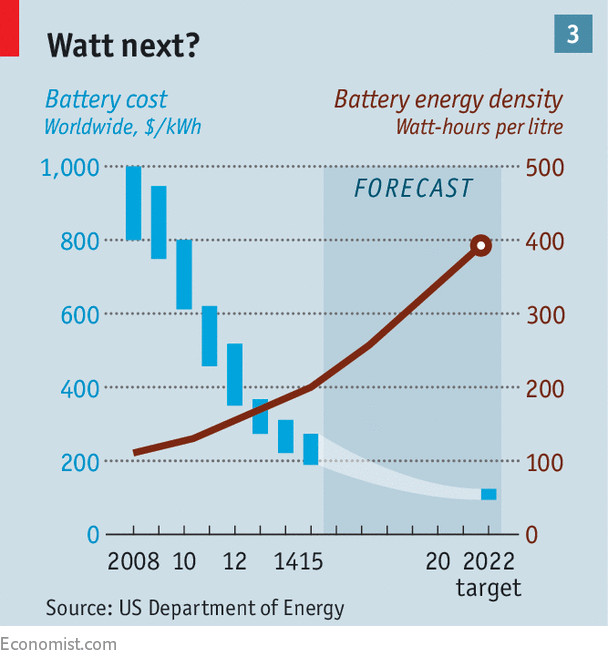 Volkswagen’s recent failure to lock in the price of cobalt for five years points to a serious problem with the optimistic projections of an electric vehicle revolution. These projections are based on gradually declining battery prices, but the scarcity of certain minerals and their concentration in politically unstable countries may interfere with that dynamic.

The high price of batteries necessary for a solid EV range is the biggest reason EVs now need government subsidies to sell in noticeable quantities. In a recent paper, Vrije Universiteit Brussel’s MOBI Research Group projected, however, that the price will fall to $100 per kilowatt-hour from the current $432 sometime between 2020 and 2025. If that happens, electric mobility without much “range anxiety” (the worry your battery will run out en route) will be within the reach of most people who can buy a gasoline-powered car today. But the recent growth in the prices of the minerals required to make lots of batteries for cars — lithium, cobalt, manganese, graphite — shows such rapid progress will be hard to achieve.

Cobalt, at some $60,000 per metric ton, is the most expensive of these minerals. Its use in battery cathodes is necessary to achieve the energy density that ensures the recent improvements in EV driving ranges. Its spot price is up 83 percent this year, largely thanks to growth in battery demand; some 60 percent of the mined cobalt is used to make batteries.

An 85 KWh battery used by Tesla requires some 8 kilograms (17.6 pounds) of cobalt. Bloomberg Intelligence predicts that growth in EV sales at currently projected levels will drive up cobalt demand by 9,300 percent by 2040, and the car industry will require about three times the 2016 total mined production that year. Given that cobalt is also an important element in the production of industrial alloys, massive production growth will be required.

At current production levels, cobalt reserves are expected to last for 57 years, compared with 400 years for lithium. Surely more reserves will be discovered, but it’s likely that production will remain dependent on one country — the Democratic Republic of the Congo, currently responsible, according to Bloomberg Intelligence, for about 54 percent of mined cobalt and some 49 percent reserves. It’s one of the world’s poorest nations currently run by a president who refused to cede power after his term ran out last year.

A large share of the country’s cobalt exports comes from “artisanal” mines — those dug by locals under the control of various strongmen. Child labor and harsh exploitation are rife, according to an Amnesty International report released last month. Much of the rest is mined by Chinese state companies, with the DRC government using its share of these projects’ profits to pay off loans issued by China. That creates tension: The government wants to extract more profit, and it’s trying to force the Chinese producers to refine more of the cobalt ore inside the country rather than export concentrate to China. In 2008, a supply squeeze driven in part by Congolese export restrictions drove the price of cobalt to its peak; the current price is 41 percent below it. Other companies may follow Tesla in pledging to ethically source their cobalt for new production, helping to eventually develop new sources, but that will take time.

In the meantime, this is a scary set of circumstances for the car industry. They’re doing their best to lock in supply. Earlier this year, Volkswagen reportedly benefited from a four-year deal whereby commodities trader and miner Glencore signed up to supply 20,000 metric tons of cobalt to Chinese battery producer Contemporary Amperex Technology. But in September, it made a more direct attempt to ensure its EV plans wouldn’t be thrown off by high cobalt prices or shortages of the metal. Its tender for five-year supplies at a price below the current spot one expired without drawing any interest.

Making electric vehicles profitable is a challenge. The uncertainty of raw materials supplies — an understatement when progress depends on an unstable African country and Chinese state firms — makes it even harder. Technological alternatives that reduce the dependence are necessary, and battery makers are looking at using less cobalt and more nickel in cathodes. Samsung has said it expects cobalt use in batteries to go down eventually to about half of the current level. Meanwhile, recycling can help increase cobalt supply, especially if the current energy-intensive process can be improved. But there’s no technology on the commercial horizon that could completely cut cobalt out without compromising on battery performance.

Perhaps the natural constraints will be useful in toning down the EV exuberance — something both regulators and the industry need to allow more time for research and development. Other solutions, such as hybrid cars with smaller batteries and fuel cell vehicles, don’t deserve to be killed off by a surge in battery-powered vehicle production just yet. For the EV revolution to benefit consumers, battery tech must make a lot of progress both in reducing its reliance on small, capricious raw materials markets and in consumer qualities such as range and charge speed.