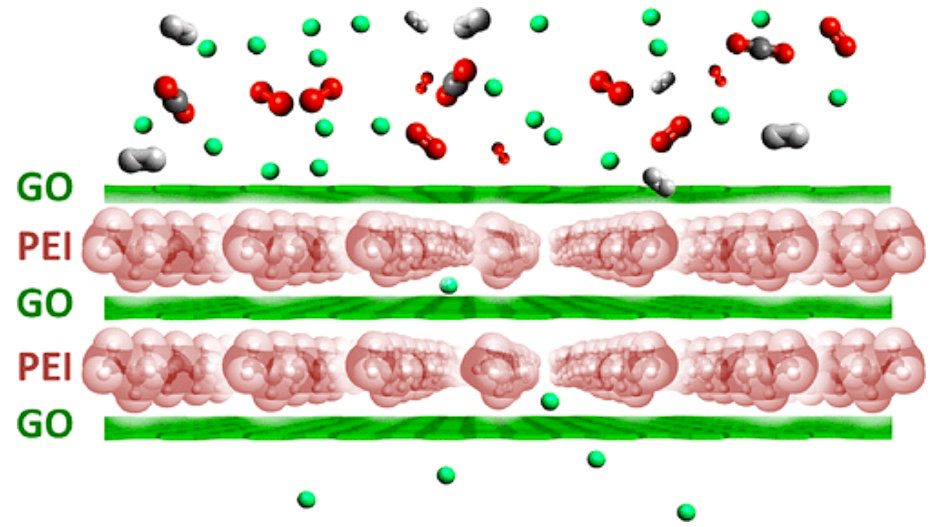 Polymer-based membranes for gas separation have a trade-off between high gas permeability and high gas selectivity, the so-called Robeson upper bound. By combining individual graphene oxide sheets with polymer spacers, in a sandwich style structure, Graphene Flagship researchers have been able to overcome such limit, separating gas quickly and efficiently.

Focusing on producing a gas separation device useful for carbon capture and storage, the researchers devised a protocol to separate CO2from H2. Hydrogen production, both from natural gas or in gasification of liquid or solid fuels, is often accompanied by the formation of a significant amount of CO2, which needs to be removed before the gas is used. Efficient separation of the CO2has greater potential for capture of this greenhouse gas.

Using a bottom up approach, the researchers deposited alternated layers of graphene oxide and a polymer poly(ethyleneimine) – PEI, using a self assembly method, to make the gas separation membrane. By using graphene oxide, (a water-soluble graphene material due to its oxidised nature), the team was able to deposit individual graphene oxide layers separated by the PEI.

The depth of the PEI layer acting as a spacer between the graphene oxide layers was found to be vitally important to guarantee high gas flux through the membrane. This separation system therefore contains a layered material and an ultra-thin polymer layer with thickness of approximately twonanometers. The graphene oxide sheets force the gaseous molecules to diffuse a torturous path within the PEI chains.

“By switching from the standard three-dimensional membrane to a layered polymer structure we achieved gas separation over the Robeson limit in a membrane only 100nm thick,” said Professor Vincenzo Palermo, coordinator of the team performing this research and Vice-Director of the Graphene Flagship.

Importantly, it was also found that the permeability of these membranes to different gasses depends strongly on the diameter of the gas molecules. This gives to the membrane a unique selectivity that eventually provides the gas separation technique with both tuneable permeability and high selectivity as well as the potential to be used on the large scale. The increased functionality to the inexpensive PEI films makes these gas separation membranes very attractive for applications.

“Through our collaboration with the University of Bologna and Graphene-XT within the Flagship, we have been able to assess the scalable nature of this research in industrial plants to separate gasses,” said Palermo.

“The authors bring to a new level the concept of two-dimensional composites structures. They managed to produce periodic stacks of layered materials and one-dimensional polymers, on large areas, using weak electrostatic forces. In this way they observe a gas permeation process much different from what is observed in “classic” stacks of two-dimensional nanosheets,” said Xinliang Feng, the leader of the Graphene Flagship’s Functional Foam and Coatings Work-Package, “This work demonstrates the power and versatility of chemical approaches to build complex structures; noteworthy, it also comes from a collaboration of the Functional Foam and Coatings Work-Package partners with a partner SME supporting our spearhead projects.”

Professor Andrea C. Ferrari, Science and Technology Officer of the Graphene Flagship, and Chair of its Management Panel, added “This is another example of how the Graphene Flagship can combine the cutting edge of research with practical applications. The potential of graphene and related materials in membrane technology was recognised early on, and this work brings it a step closer to widespread applications.”