In a belated response to falling fresh-water levels in desert areas, Chile is moving to protect a natural resource that has been depleted after decades of mining activity.

With complaints from local communities rising and the effects of climate change worsening, the world’s largest copper producer is planning to implement measures that will make it more difficult for miners to pump fresh water.

Chile’s water authority DGA will more than double the number of so-called prohibition areas across the country this year to at least 70 from 30, according to general director Oscar Cristi. No new licenses can be awarded within prohibition zones and any extension to existing permits will need to be approved by environmental authorities.

“There are mining areas that will fall within new prohibition areas,” Cristi said, declining to identify the areas to avoid possible speculation around water rights. “In some places, mining companies are allowed to pump more than is flowing into the basin, and that’s threatening the sustainability of the water systems.” 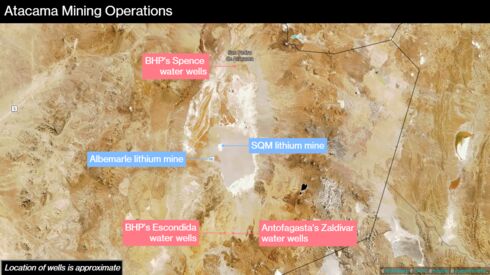 Chile’s Atacama desert in the country’s north, the driest place on Earth, hosts some of the planet’s largest copper and lithium mines. While it’s occasionally hit by heavy rains and floods, the region has become drier over the last few decades, according to the DGA. At the same time, mining companies’ demand for water is expected to soar as ore grades decline, forcing them to process more material to maintain production levels.

In response, miners are building large desalination plants, and seawater use is expected to more than triple through 2029, according to the latest forecast from Chile’s copper commission, Cochilco. Despite that, use of ground water at the country’s giant mines still is set to increase 12 percent through 2029, Cochilco said.

The DGA’s plan to boost water-protection areas is part of a larger overhaul in Chile that includes conducting independent studies to determine water levels in 10 different basins. At the moment, the agency depends on the information in company reports when awarding water rights.

“This is the most complex case we have at the moment,” Cristi said. “It is important that Escondida and Zaldivar adjust their current extraction levels if they want to continue operating because the availability of water in the basin doesn’t support the current extraction rate.”

BHP’s Escondida, which is authorized to pump 1,400 liters per second, is vowing to cut the rate to 640 liters a second starting from 2020 through 2030, according to company filings. BHP wants to completely stop using fresh water in Chile by 2030, and last year it inaugurated a $3.4 billion desalination plant that pumps seawater 3,000 meters above sea level to the Escondida mine.

BHP declined to comment on the state of its request to extend its water permits.

Zaldivar’s case is different because it has no backup plan. The mine will have to close down if its water license isn’t renewed, the company said in an emailed response to questions. The mine is in the last years of its life and will probably stop producing in 2029. The current license allows the company to pump 500 liters a second through 2025 and Antofagasta is asking for a license to pump 213 liters a second through 2029.

Water levels in the Atacama salt flats are now lower than they were before mining operations started decades ago, Cristi said. If companies reduce their water usage, the basins could recover to pre-mining levels by 2040, according to DGA calculations.

Local communities disagree and are asking the government to reject the companies’ requests to keep pumping water. The Chilean environmental service SEA has halted the evaluation process for Escondida and Zaldivar as it studies reports from the companies and local communities. At the end of the process, a technical committee that includes the DGA will vote on whether to approve or reject the license extensions.

“Every company has a different hydro-geological model and they’re all designed to basically blame the miner next door if water levels go down,” said Felipe Lerzundi, a lawyer representing the Coyo community in the process. “Wetlands have been dried out, the environment has been damaged. For the salt flat and for local communities, it is already too late.”