China Wrestles with the Toxic Aftermath of Rare Earth Mining

China Wrestles with the Toxic Aftermath of Rare Earth Mining

China has been a major source of rare earth metals used in high-tech products, from smartphones to wind turbines. As cleanup of these mining sites begins, experts argue that global companies that have benefited from access to these metals should help foot the bill.

The mountains north of the village of Lingbeizhen in southern Jiangxi province no longer echo with the rumble of bulldozers and trucks. New bamboo groves climb the ravines. Tropical pines and navel orange trees grace terraces carved from the mountainsides, covering what was a hive of activity a few years back.

Higher up, where it is more difficult to replant and where erosion has taken its toll, nearly every knoll and mountaintop is scarred from mining activity. Black rubber hoses curl in the sun. PVC pipes, their ragged edges protruding from the red clay, mark where small crews of miners injected tons of ammonium sulfate, ammonium chloride, and other chemicals into the earth to separate valuable rare earth metals from the surrounding soil.

Beginning in the 1990s, rare earth mining took off in this region, located in Southeast China about 300 miles north of Hong Kong. As China began to produce more smartphones, wind turbines, electric vehicles, and other high-tech products requiring rare earth elements, the mining intensified. But the removal of these elements from the earth’s crust, using a mix of water and chemicals, caused extensive water and soil pollution.

Today, concrete leaching ponds and plastic-lined wastewater pools dot the hills. At one abandoned site, large wastewater ponds sit uncovered and open to the elements. Satellite images show dozens of similar pools dotting the mountains, all just one landslide or barrier failure away from a spill of their contaminated contents into waterways or groundwater.

Environmental experts and local officials say the cost of the cleanup should not be shouldered by the Chinese government alone.

Now, local and federal officials have shut down illegal and small-scale rare earth mining operations and embarked on a cleanup of polluted sites. Part of wider efforts across China to begin addressing severe problems of water, air, and soil pollution, the cleanup here was highlighted in late May when Chinese President Xi Jinping visited Ganzhou, the major city in the rare earth mining region. Touring a rare earth processing facility that produces magnets for high-tech products, Xi discussed how to mine rare earths without causing the environmental damage now confronting Ganzhou, Longnan, and other areas in Jiangxi Province.

Environmental experts and local officials say the cost of the cleanup should not be shouldered by the Chinese government alone, but also by the rare earths industry and the global companies and consumers that benefit from these technologies.

“To us as an environmental group, we hope that the environmental damage can stop and that these external [pollution costs] could be internalized in the cost” of products, Ma Jun, a leading Chinese environmentalist and director of the Institute for Public and Environmental Affairs, said in a phone interview.

Ma’s fear is that other regions around the world could suffer a similar fate if they become, like China, the supplier of cheap rare earth elements, with little or no environmental price attached. “I hope that we don’t miss this opportunity,” he said. “There is talk that similar mining could be started in Africa and other regions, so we should not repeat the same mistakes.”

China’s Ministry of Industry and Information Technology estimated that the cleanup bill for southern Jiangxi Province could amount to 38 billion yuan, or around $5.5 billion. Only a fraction of that amount has so far been spent.

“The cleanup has been difficult, especially because there has been a long history of mining here,” Xu Cheng, director of the Longnan Rare Earths Bureau, said in an interview at the government offices in Longnan. “Some experts said that it will take 50 to 100 years before the environment can fully recover, so the cost born by the locals has been high.

“Since those [technology] companies have benefited from using our rare earth resources, they should bear a part of the responsibility and join the process of cleaning up the environment … We have made huge sacrifices to extract the resources they need.”

Everything from computers to X-ray machines and aircraft engines needs one or more rare earth elements for magnets, lenses, and other functions. Tech companies from Apple to Huawei to Tesla would be hard pressed to continue their growth trajectories if supplies of rare earth elements such as dysprosium (Dy), europium (Eu), terbium (Tb), and thulium (Tm) were limited or became too expensive.

Globally, rare earths are not, in fact, that rare, but they are expensive to extract if done in ways that cause less harm to the environment. The mining industry in southern Jiangxi Province was largely unregulated until recently, with illegal mining operations proliferating.

Those operations used two main methods to extract the rare earths. The first involved removing layers of topsoil and transporting them to a leaching pond, where acids and chemicals were used to separate the various rare earth elements from the clay, soil, and rock. The other process involved drilling holes into hills, inserting PVC pipes and rubber hoses, and then flushing out the earth using a mix of water and chemicals. This mix was then directly pumped or transported to the leaching ponds for further separation of rare earth elements.

Deng Zhiyong, director of the Longnan Environmental Protection Department, said in an interview that the mining has dumped excessive amounts of ammonia and nitrogen compounds into the region’s ground and surface water. Other pollutants, such as cadmium and lead, also are released during the mining process; long-term exposure to these metals poses health risks.

In addition, rare earth mining done near uranium deposits has also led to radioactive material clinging to the elements in some areas, according to Xiang Huang, a postdoctoral fellow at the University of Waterloo in Canada, who studied the environmental and health impacts from rare earth mining while earning his PhD at Beijing University.

“The end impact,” Huang said, “could be on the central nervous system, cancers like bone cancer, skin cancer, and cardiovascular and respiratory issues.”

Longnan County officials say they started to crack down on illegal rare earth mining and smaller mining operations in 2011, but they were only able to finish the shutdowns in mid-2017. These enforcement efforts were part of a long, slow process of consolidation within China’s rare earth industry that has led to six major state-owned companies controlling rare earth mining, processing, and exporting.

Tougher regulations governing rare earth mining and in-situ leaching operations were introduced in 2016, but by then significant damage had been done. Local officials say they are now requiring companies to upgrade their mining technologies and engage in more costly and less environmentally harmful mining and extraction processes. These include consolidating rare earth processing operations and locating them in designated industrial parks with wastewater treatment plants. Mining sites also are required to take steps to reduce erosion and cut down on dust. 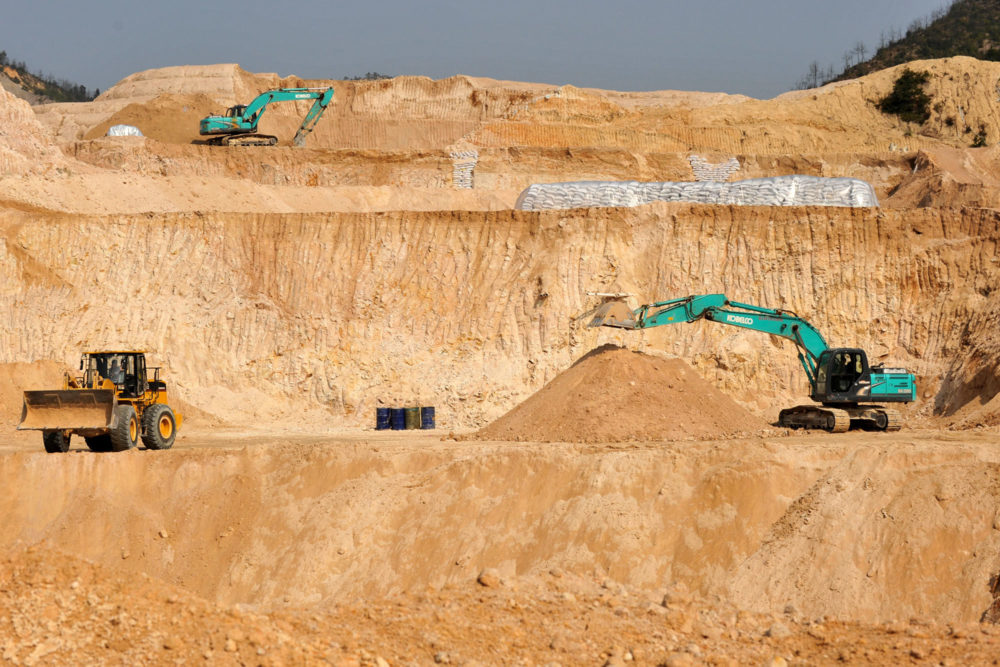 Scientists in China and around the world are experimenting with the use of bacteria and other non-chemical materials to extract rare earth elements, but these experiments are still in the early phase.

“The rare earth industry is a pillar industry here in Ganzhou and we must keep it running, but there’s still more to do to figure out a truly environmentally friendly method to pursue sustainable growth,” Zhang Guanjun, deputy director of the public relations department of the Ganzhou Party Committee, said in an interview. “Ironically, because the prices of rare earths have been so low for a long period of time, the profits from selling these resources are nothing compared to the amount needed to repair the damage.”

He said that rare earth industries in Ganzhou reported revenues of around 28 billion yuan [$4 billion] in 2018.

Huang of the University of Waterloo said that Jiangxi Province is dotted with many small surface tailing ponds where rare earths leaching took place, “so the contamination sources are very dispersed … The wastewater has a high toxicity, so if the leaching ponds break there can be a lot of contamination downstream.”

According to a 2016 report from the Hong Kong-based think tank, China Water Risk, rivers flowing through the area, including the Dongjiang River, provide much of the drinking water to populous areas such as Hong Kong, Shenzhen, Guangzhou, and several other major cities.

The focal point of the cleanup is setting up wastewater treatment facilities to keep polluted water from reaching neighboring provinces.

At the moment, the focal point of the cleanup is setting up wastewater treatment facilities to keep polluted water from reaching a wider area and into neighboring provinces like Guangdong, Deng said. Authorities have constructed several facilities, including one that treats 40,000 metric tons of wastewater per day before it is discharged into a river. The facilities primarily remove ammoniacal nitrogen, a toxic pollutant found in the rare earths leachate.

“I think it’s safe to say that our wastewater treatment measures are unprecedented in China and even around the world, since this is in many ways different from industrial wastewater, and no other place has faced similar problems on such a massive scale,” Deng said.

He added that since rare earth mining caused heavy damage to vegetation, cleanup crews are also planting pines, bamboo, grasses, and other vegetation that restore denuded areas and minimize erosion.

The area where much of the mining took place has no farms and few residents. During my visit to the region, an old woman on a motorbike slowly made her way up a mountain road with a load of bamboo on the seat behind her. A man in his 60s came along and asked for a ride to a nearby town, not giving his name. He seemed unconcerned about the mining pollution.

“The mining has stopped so there are no more problems,” he says. “They’ve been replanting a lot of trees here.”

Local officials could not say exactly how much has been spent on the cleanup. State media reported that around 300 million yuan, or $43 million, was distributed from the central government to the area for remediation in 2015. However, officials from the Ministry of Ecology and Environment, visiting the region in June 2018, found that local bureaus had provided false reports on the extent of replanting and erosion control, and that the total area treated so far had been exaggerated.

This article was completed with assistance from Zhong Yunfan.