Vanadium: One Battery Material Sector Is Cheering For Lower Prices

(Bloomberg) — Lower prices of vanadium, a metal mainly known for strengthening steel, are key in the drive to increase its use in the booming battery sector, according to the developer of an Australian mine.

The metal’s retreat from a price spike in 2018 is being welcomed — rather than lamented — by producers as they seek to extend vanadium’s use in large-scale energy storage batteries, according to Vincent Algar, managing director of Australian Vanadium Ltd., which plans to bring its project into production by about 2021. 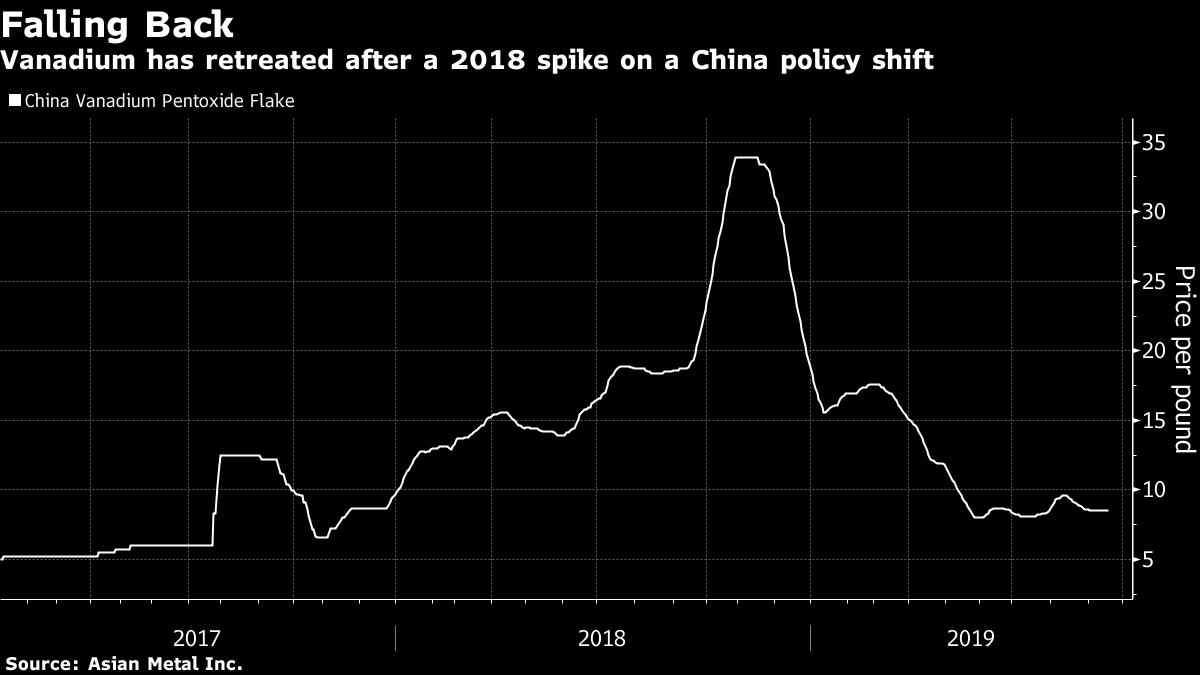 Vanadium can be used in redox-flow batteries that advocates argue are better suited than existing lithium-ion technology to store large amounts of energy to back up power grids, or to integrate more renewable energy assets. There’s potential for the battery sector to account for at least 20% of demand for the metal, up from about 2% now, Algar said.

Prices of vanadium pentoxide in China have declined about three-quarters from an October 2018 high to $8.50 a pound, according to Asian Metal Inc. data. A price between $8 and $12 should allow producers to prosper and also spur greater adoption in the battery segment, according to Algar.

“There’s a happy balance to be had,” Algar said Wednesday in an interview in Melbourne. “We want both the vanadium industry and battery industry to be robust, but also for the battery sector to be able to afford to enter into long-term agreements with us.”

Lithium-ion technology, though, continues to be preferred for utility-scale applications and accounted for about 60% of commissioned projects in the first half of 2019, BloombergNEF said in a Sept. 9 report.

The steel industry, which accounts for about 90% of vanadium demand, is also lifting use of the metal as prices fall, Evraz Plc, a key producer, said last month. Prices jumped in 2018 as larger amounts of vanadium were added to some steel products to comply with new rules in China to raise the quality of products used in the construction sector. Steelmakers have since partially substituted the metal with alternatives including niobium and titanium.