John B. Goodenough, M. Stanley Whittingham and Akira Yoshino were recognized for research that has “laid the foundation of a wireless, fossil fuel-free society.” 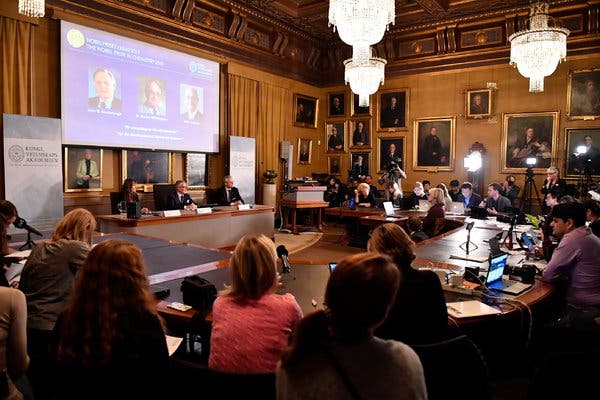 The Royal Swedish Academy of Sciences on Wednesday awarded the 2019 Nobel Prize in Chemistry to three scientists who developed lithium-ion batteries, which have revolutionized portable electronics and are very likely powering a device you’re using now to read this article. Larger examples of the batteries have given rise to electric cars that can be driven on long trips, while the miniaturized versions are used in lifesaving medical devices like cardiac defibrillators.

John B. Goodenough, M. Stanley Whittingham and Akira Yoshino will share the prize, which is worth about $900,000.

“Lithium-ion batteries are a great example of how chemistry can transform people’s lives,” said Bonnie Charpentier, president of the American Chemical Society. “It’s wonderful to see this work recognized by the Nobel Prize.”

The three researchers’ work in the 1970s and ’80s led to the creation of powerful, lightweight and rechargeable batteries used in nearly every smartphone or laptop computer, and in billions of cameras and power tools. Astronauts on the International Space Station rely on them, and engineers working on renewable energy grids often turn to them. By storing electricity generated when sunlight and wind are at their peak, lithium-ion batteries can reduce dependence on fossil fuel energy sources and help lessen the impact of climate change.

M. Stanley Whittingham, 77, a professor at Binghamton University, State University of New York, and one of the three winners, said that he always hoped lithium-ion technology would grow, “but we never envisaged it growing this far. We never imagined it being ubiquitous in things like iPhones.”

John B. Goodenough, 97, is a professor at the University of Texas at Austin. With the award he becomes the oldest Nobel Prize winner, but is still active in research.

And Akira Yoshino, 71, is an honorary fellow for the Asahi Kasei Corporation in Tokyo and a professor at Meijo University in Nagoya, Japan. He said after the announcement that he was pleased that the technology could also help fight climate change, calling lithium-ion batteries “suitable for a sustainable society.”

Ever since Alessandro Volta invented the first true battery in 1800, scientists have tried to find ways to get electrons to flow from a negative electrode called an anode to a positive electrode called a cathode. Volta did this by stacking discs of copper and zinc, and linking them with a cloth soaked in salty water. When wires were connected to the discs to complete a circuit, the battery produced a stable current. In subsequent decades, versions of these batteries powered telegraphs and other devices.

The first rechargeable battery came about in 1859. These were made from lead-acid, and are still used to start gasoline- and diesel-powered vehicles today. But lead-acid batteries were bulky and heavy. Nickel-cadmium batteries, which were less efficient but more compact, were invented in 1899.

For many years, there were no major advancements in battery technology. But the Arab oil embargo of 1973 made many scientists realize the extent of society’s dependence on fossil fuels. Dr. Whittingham, who was working for Exxon at the time, began searching for improved ways to store energy from renewable sources and power electric cars.

He knew that lithium would make a good anode because it released electrons easily. It also had the advantage of being the lightest metal. So Dr. Whittingham started looking for materials that had a high energy density and captured lithium-ions in the cathode — the side of your battery with the plus sign.

Dr. Whittingham discovered that titanium disulfide, which had never been used in batteries before, had a molecular structure that let lithium-ions into small pockets. This resulted in the first functional lithium battery.

“The big advantage of this technology was that lithium-ion stored about 10 times as much energy as lead-acid or 5 times as much as nickel-cadmium,” Dr. Whittingham said. Lithium-ion batteries were also extremely lightweight and required little maintenance. “So there was a huge incentive to move to lithium-ion.”

Unfortunately, Dr. Whittingham’s new battery had a problem. When it was repeatedly charged, thin strands of metallic lithium would grow out from the negative electrode. Sometimes, the strands would grow long enough that they reached the cathode and short-circuited the battery, and could cause an explosion.

Dr. Goodenough, then at Oxford, predicted that lithium-ion batteries would have greater potential if the cathode were made with a different material. He noticed that cobalt oxide was similar in structure to titanium disulfide. It could tolerate lithium being pushed into it and pulled out over and over. It also made the lithium-ion battery almost twice as powerful as Dr. Whittingham’s. The battery now generated four volts.

Building from Dr. Goodenough’s work, Dr. Yoshino, who was at the Asahi Kasei Corporation in Japan, then showed that more complicated carbon-based electrodes could house lithium-ions in between their layers too. This eliminated pure lithium from the battery entirely. Instead, the system used only lithium-ions, which are safer.

These developments ultimately led to commercialization of the lithium-ion battery in 1991 by another Japanese electronics giant, Sony Corporation.

The compact nature and reliability of lithium-ion batteries made the technology a staple in electronics that had once been powered primarily by disposable batteries that consumers always seemed to run out of at the wrong time. That included radios, hand-held gaming devices, laptop computers and eventually smartphones and wearable computers.

But the technology has its flaws, too.

Some of the biggest tech product recalls have involved battery defects. In 2006, Dell recalled 4.1 million laptop batteries because they could erupt in flames. More recently, Samsung Electronics recalled and discontinued the Galaxy Note 7, its flagship smartphone, after several reports of the device exploding.

Technologists often point to lithium-ion as an innovation roadblock: While computer chips have doubled in speed every few years and digital displays have become significantly brighter and sharper, tech companies have made only incremental improvements on batteries; there’s not much that engineers can do beyond making the batteries bigger and implementing software algorithms to make hardware more power efficient.

Despite the hiccups, companies continue to rely on the batteries because they can be cheaply and reliably reproduced. They have also been scaled up for use in larger settings.

Energy storage, most often using lithium-ion battery technology, is widely seen as necessary for transforming the electric grid to a carbon-free system and combating the effects of climate change. Most electricity in the United States — and in many other parts of the world — comes from fossil fuel sources, predominantly natural gas but also coal.

Battery technology helps replace those carbon-emitting sources because it allows power companies to store excess solar and wind power when the sun does not shine nor the wind blow — the weakness of those carbon-free sources.

The most critical area for the electric grid has been providing power when people return home from work during the summer and turn on their air-conditioners, cook dinner and wash clothes, when utilities often rely on natural gas plants designed to meet those periods of high demand, known as peaking plants, which typically are more expensive.

“What’s exciting about lithium-ion technology is it has the power to unlock the sun 24-7 to really help renewable energy power our future in a way that we haven’t been able to capture until now,” said Bernadette Del Chiaro, executive director of the California Solar and Storage Association, an industry group.

The potential of battery technology is highlighted in Northern California, where Pacific Gas & Electric is shutting off power to hundreds of thousands of customers on Wednesday because of the risk of wildfires.

Some of their neighbors who have combined solar and battery systems can continue to meet their energy needs.

“From a high level, lithium-ion batteries have increased reliability, they’ve enabled greater renewable penetration, they’ve reduced the reliance on centralized power,” said Ed Fenster, co-founder and executive chairman of Sunrun, one of the largest residential solar companies in the United States. “They’re going to do to the electric grid what the P.C. did to the mainframe computer.”

But while the batteries can be a part of the solution for reducing fossil fuel use, they have also resulted in other problems around lithium extraction and waste.

More than half of lithium is gathered using brine extraction from deep inside the earth, especially in South America, and the rest is still mined traditionally from rock. Both methods have caused environmental damage to areas around lithium processing operations. And as the demand for lithium increases, companies may resort to using energy-intensive heating to speed up brine evaporation. Some lithium sources could also be overextracted.

“If you think about the batteries in cellphones, most of them are thrown away and end up in landfills,” said Alexej Jerschow, a chemist at New York University.

While some companies that make smartphones and other devices have attempted to improve their recycling records, dismantling the batteries and removing the metal for reuse involves another high-temperature melting and extraction process.

“It is just not economical,” Dr. Jerschow said.

Scientists have experimented with new power technologies that use alternate methods to replenish batteries, like pulling energy from the air or through radio signals. But any potential successor to lithium-ion would have to undergo rigorous safety tests before being introduced to the public.

Who won the 2018 Nobel for chemistry?

The prize last year went to Frances H. Arnold and George P. Smith, both of the United States and Gregory P. Winter of England, for work that tapped the power of evolutionary biology to design molecules with a range of practical uses, such as new drugs, more efficient and less toxic reactions in the manufacture of chemicals, and plant-derived fuels to replace oil, gas and coal extracted from the ground.

Dr. Arnold was only the fifth woman to win the prize.

Who else has won a Nobel Prize this year?

When will the other Nobel Prizes be announced this year?