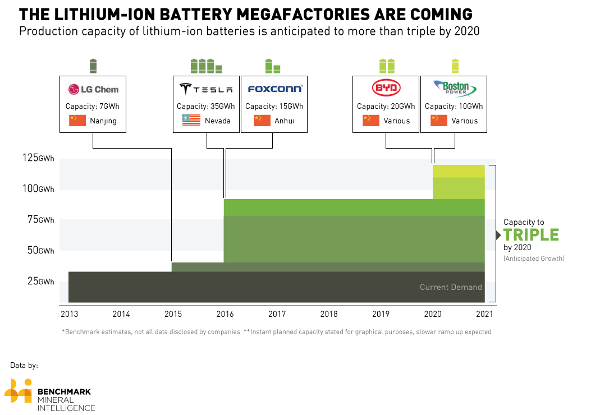 Mining giant Rio Tinto (LON:RIO) wants to be one of the first major miners to get a grip on the lithium market, one of the very few commodities, if not the only one, that has remained unaffected by the ongoing rout in metals and fuel prices.

According to the company’s chief executive of diamonds and minerals, Alan Davies, Rio is already seeking strategic alliances with battery or car manufacturers to underpin the development of its Jadar lithium-borate project in Serbia.

“Lithium carbonate would be new for us, but the world will need a lot more lithium in the future for electric cars,” Davies said according to The Sydney Morning Herald.

And while it is unlikely to be developed in the next year or two, Davies said Jadar was an “exciting” project for the company due to its potential, adding that Serbia was “open for business and keen for development.”

His comments come as lithium carbonate prices have climbed about 70% over the past two months to $10,000 a tonne, according to research by Citi published this week.

As demand for electric batteries continues to rise, the analysts say the global lithium market is dangerously approaching a shortage, with no new supply coming on stream next year. At the same time, battery factories being built in China are set to increase demand for lithium, which is also — and more traditionally — used in ceramics, glass, polymers and alloys.

Meanwhile, Tesla — the electric carmaker — is in the midst of building the world’s largest battery plant. But, according to Financial Times, the firm has yet to announce a major lithium supply deal, which leaves an important window open to current and potential providers of the lightweight natural material.

Serbia’s Jadar basin is the only place in the world where the lithium oxide and boric acid mineral jadarite is found.

Rio Tinto already accounts for 50% of the world’s borate demand from its boron operation in California’s Death Valley.

But it is Chile, Bolivia and Argentina the countries that currently dominate the lithium market, as they hold more than 70% of the world’s known reserves.