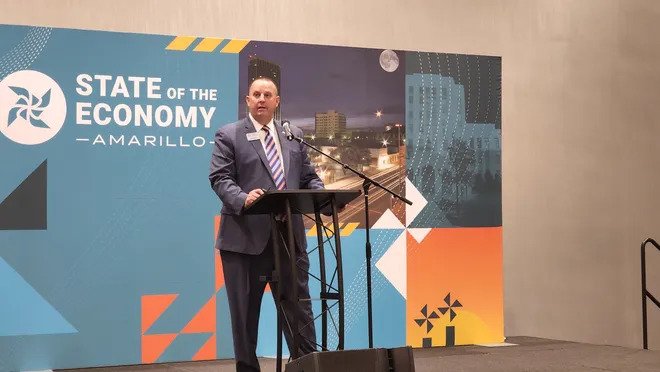 Amarillo Economic Development Corporation President Kevin Carter speaks to the crowd at the “State of the Economy” event in this file photo. Carter spoke about the centralized location of Amarillo along Interstate 40, which makes it ideal for two major business prospects discussed at Tuesday’s Amarillo City Council meeting.

The Amarillo City Council on Tuesday unanimously approved five economic development-related incentives toward two major business investments for the Amarillo area for Producer Owned Beef, LLC and CVMR (Texas), which would incentivize $2.15 billion in capital investment in the region.

Location and tax abatement incentives were offered to both companies to persuade these substantial project overlays to bring their facilities to the Amarillo area.

CVMR (Texas) is interested in a location to build a 500,000-square-foot mineral processing facility. The proposed location for Amarillo would be 540 acres on US Highway 60 west of Parsley Road at a cost of $1.5 billion, which according to the city of Amarillo would be its largest economic agreement ever approved by the city council.

The facility would be a processing facility for rare earth metals, refining the metals into the production of various materials. These metals would be brought in from another state and refined and processed here.

President and CEO of the Amarillo Economic Development Corporation (AEDC) Kevin Carter spoke about the centralized location of Amarillo along Interstate 40, which makes it ideal for this project.

“One of our slogans is that we are in the middle of everywhere, and we want to capitalize on that,” Carter said.

Agenda items passed unanimously by the council to convince CVMR (Texas) to invest in the Amarillo area are:

– The Amarillo EDC will provide CVMR (Texas) Inc. with $20 million for the creation of jobs to be paid out over 10 years as they are created.

Tax Abatement Agreement between the city of Amarillo, the Amarillo EDC and CVMR (Texas) Inc.

– The agreement would provide for an abatement of future taxes on the construction and equipment costs at 100% abatement for 10 years on $1.5 billion estimated costs of improvements.

Mayor Ginger Nelson said that these projects were indicative of how the city is being looked at by the business community, and the council has had extensive research and debate on the incentives to bring in new business.

Councilmember Cole Stanley spoke on his reasoning for throwing his support behind the tax incentives for these businesses.

“With a $12 billion economic impact over 20 years, if you believe in capitalism, you also believe in incentivizing growth like this that produces capitalism, produces small business, produces growth in your economy,” Stanley said.

The other business looking to expand its operation in Amarillo is Producer Owned Beef, LLC, which has its eye on 1,108 acres located between I-40 and US Highway 287 just west of FM 1912.

Carter said that the company was established to address increasing beef packer margins and fix the imbalance of fed cattle production and harvesting capability. The company will create more capacity for beef harvesting, creating a stronger link for ranchers and consumers.

Producer Owned Beef, LLC will create an estimated $650 million in estimated capital improvements, bringing on 1,600 new employees with a $75 million projected annual payroll. According to Carter, the project expects to bring $7 billion in economic impact over 20 years to Amarillo if chosen for the site.

Due to the central location of Amarillo to its expansive number of cattle producers in the region, Amarillo is looked upon as a favorable location for the company, according to Carter. If chosen for the facility, the new site would be expected to be in operation by the year 2025.

– Under the agreement, the Amarillo EDC would provide Producer Owned Beef $8 million for the creation of jobs to be paid out over five years as they are created.

– The Amarillo EDC would also convey 610 acres, valued at more than $3.1 million, to Producer Owned Beef.

Tax Abatement Agreement between the city of Amarillo, the Amarillo EDC and Producer Owned Beef, LLC

– The agreement would provide for an abatement of future taxes on the construction and equipment costs at 100% abatement for 10 years on $650 million estimated costs of improvements.

– The city agrees to design and construct a water main extension and associated meter at an approximate cost of $3.45 million.

– The city agrees to participate in an amount not to exceed $120,000 toward a sanitary sewer extension.

– There will be a one-time permit fee amount of $1,290,000 for plan reviews and building permits.

– There will be a water rate structure agreement for the same rate as the fed cattle beef production facility, located northeast of the Rick Husband International Airport.

Stanley said that he could understand the public concern in comments about giving tax incentives to new entities. He said that the economic impact that this project will have on the city makes it an easy decision in what it will bring in future revenue.

Nelson praised the measure and its possible economic impact on the region. Councilmember Eddy Sauer called this a home run.

“This might be a grand slam,” Nelson said. “Thirty-three years, the EDC has been in existence, looking for projects to incentivize such as this. This will have a tremendous and unique impact. We are incredibly grateful to have this in our community. We do not have to vote for it. We get to vote for it, and what a privilege.”

Nelson said that the potential impact of these two projects were like hitting two grand slams back-to-back for the Amarillo community, to have projects of this magnitude to be in consideration.

“It’s indicative of where we are with the opportunities we have right now, and we capitalize on them, we will have more opportunities,” Nelson said.

According to Carter, he is optimistic that the two companies will make decisions within the next few months about the location of where to build its new facilities.

“It just proves that we’ve got a great product to sell here in Amarillo,” Carter said. “Things are going really, really well, and you certainly want to capitalize. It is our time, and let us capitalize on it. That is what we are trying to do with these projects today.”