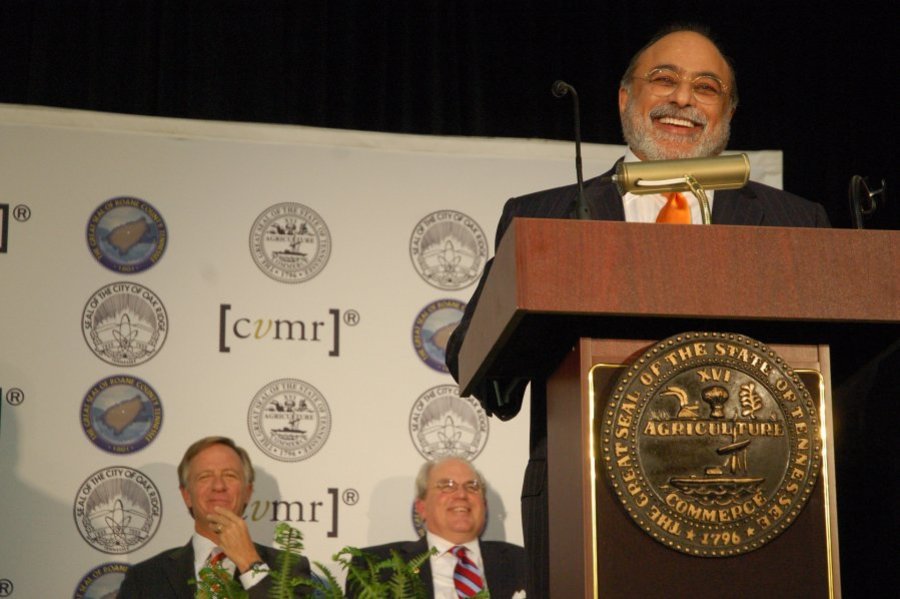 A company that manufactures high-purity metal powders and super alloys is moving its operations to Oak Ridge from Toronto, Canada, and investing $313 million here and creating 620 jobs, officials said Friday.

CVMR, which has operations in 18 countries, will use the former Theragenics building at Horizon Center in west Oak Ridge for its headquarters and research and development. The company closed on that building, which is on 21 acres, on Friday, but executives declined to disclose the sale price.

The company could expand that 65,000-square-foot building; infrastructure that is already in place allows it to be doubled. The company could put 218 people to work right away in its new headquarters and add 402 high-paying manufacturing jobs later, a state official said.

“I can promise you that this is the start of a wave,” said Randy Boyd, the new commissioner of Tennessee Economic and Community Development.

The manufacturing facility could be built about two miles away on 25 acres at an old steam plant near the former K-25 site, now known as Heritage Center. That property is owned by the U.S. Department of Energy.

“We expect to be much bigger and invest much more in the next five years,” Khozan said.

He said there could be about 120 PhD researchers at the company’s new Oak Ridge headquarters.

Ores concentrated overseas in places such as the Phillipines, Indonesia, and African countries will be shipped or sent by barge to Oak Ridge, where they will be processed.

CVMR USA President Michael Hargett said the company has commitments to manufacture by June 2015. The company plans to begin operating by the end of May 2015. Systems and equipment that are now in Toronto will be moved to Oak Ridge, Hargett said.

CVMR uses the ore concentrates to create pure metal powders. Those then go to manufacturers that make parts for customers, such as NASA and the U.S. Department of Defense. CVMR works with 52 metal powders and metal concentrates such as nickel, iron, and cobalt, and it produces about 34 unique products that can be used in batteries, 3D manufacturing, medical instruments, defense equipment, and the aerospace industry.

DOD is CVMR’s largest customer, but others include NASA, General Electric, and General Dynamics.

A state press release said a large part of the U.S. plant will be used to produce metal powders for 3D printing and graphene for advanced products.

There will be state incentives for the company, but Haslam said those haven’t been finalized yet.

CVMR will create a Centre of Excellence for Innovation in Powder Metallurgy and production facilities for a wide range of advanced metal products.

“CVMR’s location to Oak Ridge adds to the distinction of our community as a place of innovation and advanced composite discoveries for the world,” Oak Ridge City Mayor Warren Gooch said.

Hargett said CMVR will work with ORNL researchers in the Manufacturing Demonstration Facility, nanotech, materials and ceramics, and additive manufacturing. He said the company’s powdered product is to 3D manufacturing as ink is to paper.

Khozan said about 75 percent of metal parts use metal powders and alloys. And the industry is growing at about 26 percent in the United States, compared to 13.5 percent in China.

He said Tennessee has a business-friendly environment and cited the importance of Oak Ridge National Laboratory and its ability to cooperate on projects and the University of Tennessee and its ability to supply scientists and engineers. He said Oak Ridge has first-class infrastructure, including first-class transportation facilities and the nearby Clinch River. Hargett said the labor force is also key; employees can work in a high-tech setting that complies with global standards, he said.

Khozan said Haslam has been a great salesman for the state of Tennessee. Many people received credit for helping with the deal announced Friday, one of the biggest in Oak Ridge in years. Among those who received special credit were Oak Ridge consultant Steve Jones, Wade Creswell of the Roane Alliance, and Tom Rogers of ORNL.

The state press release said CVMR plans to quadruple its production capacity at the site during the next three years and will begin construction of the additional facility in June 2015. 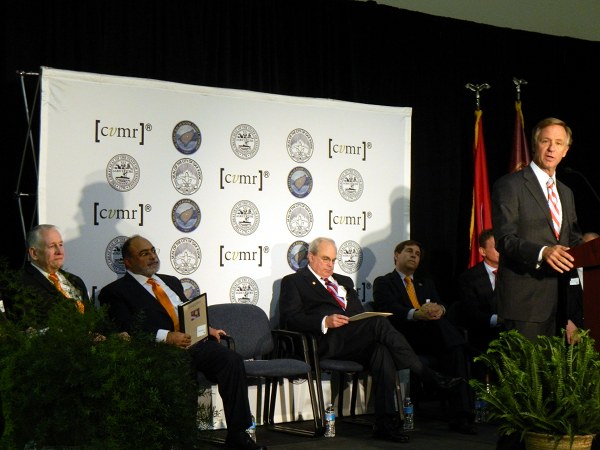 Here’s more information from the press release (we will update this story as we can):

Tennessee Governor Bill Haslam and Economic and Community Development Commissioner Randy Boyd along with CVMR officials today announced the company will establish its global headquarters in Roane County. CVMR is moving all of its current operations from Toronto, Canada, to a Tennessee manufacturing facility located at 103 Palladium Way in Oak Ridge. CVMR is investing $313 million to establish this facility and create the CVMR Centre of Excellence for Innovation in Powder Metallurgy and production facilities for a wide spectrum of advanced metal products, resulting in 620 new jobs for Roane County.

“Today is exciting not just for Oak Ridge and Roane County but for all of Tennessee, and I want to thank CVMR for its significant investment in our state, making us the home of its corporate headquarters, research and development and manufacturing,” Haslam said. “This announcement sends a clear signal around the world about our skilled workforce, Tennessee’s commitment to innovation and its ability to compete in the global marketplace.”

“By leveraging unique resources like Oak Ridge National Laboratory, Tennessee is in an extraordinary position to support long-term growth of advanced manufacturers like CVMR,” Boyd said. “The Centre of Excellence for Innovation in Powder Metallurgy sets the stage for future innovation and makes a real statement about the strength of Tennessee’s workforce. Through workforce initiatives, like Drive to 55, we are developing and maintaining a pipeline of students who will be ready to work at some of the most sophisticated manufacturing facilities in the world. I appreciate CVMR’s commitment to Tennessee and the 620 new jobs they are creating in our communities.”

“We evaluated four states before we decided to move our head office to Oak Ridge, Tennessee. Tennessee has the infrastructure that our operations require. It has a great university that can supply the scientists and engineers we need. The proximity of Oak Ridge National Laboratory and their willingness to cooperate on a number of projects with us, the availability of first class transportation facilities, and ability to use the river, all were contributing factors to our final decision,” Kamran M. Khozan, Chairman and CEO, CVMR (USA) Inc., said. “But above all, the efficiency with which the state, county, and city officials dealt with us and made us feel welcomed, made our final decision quite easy. It was an honour and a privilege for me to meet with Governor Bill Haslam. His style of leadership and efficiency of his government was a major positive influence in our final decision.”

This environment supports investment and further development of CVMR technologies.”

CVMR USA is a new company formed to use the technologies and metallurgical expertise of CVMR to address market demands for products manufactured from metal powders in the U.S. CVMR USA will refine and manufacture high-value metals and metal products directly from raw ore, scrap metals, concentrates and mattes.

CVMR plans to begin operating by the end of May 2015 and will transfer to Oak Ridge the production of advanced metal materials for a variety of industries, including aerospace, energy, automotive and medical devices. CVMR plans to quadruple its production capacity at the site over the next three years and will begin construction of additional facility in June 2015. 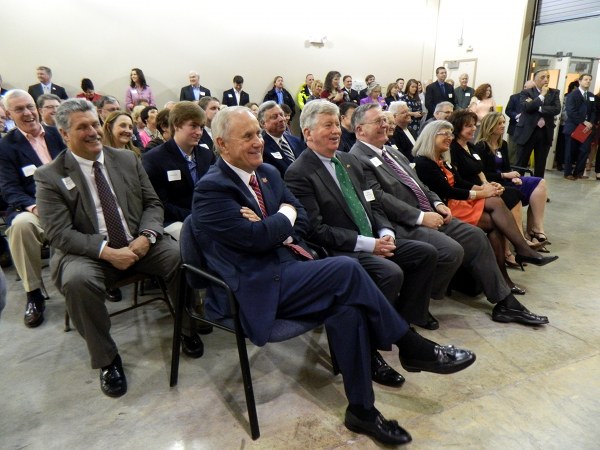 A range of local, state, and federal officials attended the announcement, and so did representatives from the business community and elsewhere.

The Oak Ridge facility will house CVMR USA’s corporate headquarters, research and development, production of nano materials and metallurgical coating services, customer support, product development, and planning for U.S. production facilities. The CVMR Centre of Excellence for Innovation in Powder Metallurgy will collaborate with academic, industrial, government, and businesses entities interested in the development of advanced materials and innovative technologies. The Centre will focus on production of new metallurgical products that can benefit the metal industry.

“Roane County is proud to welcome CVMR as our newest industry,” Roane County Executive Ron Woody said. “Having such an innovative company locate here strengthens and diversifies our economy and increases our impact on the rest of the world, which is already significant through our partners at the Department of Energy and our existing companies.”

“As mayor of Oak Ridge, I want to be the first to welcome the CVMR world headquarters to Oak Ridge. CVMR’s location to Oak Ridge adds to the distinction of our community as a place of innovation and advanced composite discoveries for the world,” Oak Ridge City Mayor Warren Gooch said. “As we diversify our economy for additive manufacturing, CVMR is at the center of the world of 3D printing and advanced metallurgy. Oak Ridge will be by their side as a partner in establishing a hub for new technologies and advanced composite businesses for Oak Ridge and the region.”

“TVA and the Oak Ridge Electric Department congratulate CVMR Corporation on its announcement to locate and create hundreds of new jobs in Oak Ridge,” TVA senior vice president of Economic Development John Bradley said. “We are pleased to partner with the state of Tennessee, the Oak Ridge National Laboratory, the City of Oak Ridge, many Oak Ridge community leaders, and Roane County to facilitate CVMR’s new location decision.”

“We’re welcoming CVMR to Tennessee because a lot of people worked together to show them our area’s unique resources,” Thom Mason, director of Oak Ridge National Laboratory and chairman of the regional Innovation Valley partnership, said. “ORNL’s leadership in additive manufacturing is a perfect fit for CVMR, for instance. In partnership with Roane County, the city of Oak Ridge, TVA and others, we’re seeing Tennessee build a manufacturing sector at the forefront of current technologies.”

CVMR will immediately begin hiring people with experience as materials specialists, chemical technicians, product development, and those with advanced degrees in these particular areas. 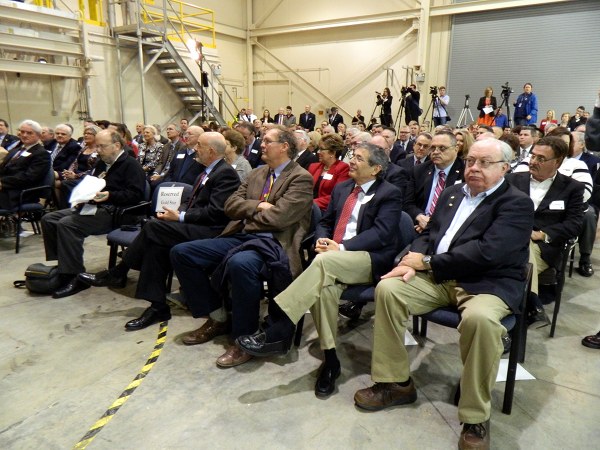 The announcement was made inside CVMR’s new headquarters and research and development building, which is the former Theragenics building at Horizon Center in west Oak Ridge.